Why use bellows expansion joints in high temperature pipelines?

The types of expansion joints and compensation design of typical pipe sections are mainly divided into the following types:

A flexible device consisting of a corrugated pipe and two end pipes (or flanges) that can be connected with adjacent pipes and equipment is mainly used to compensate the axial displacement of the straight pipe section, and also can absorb a small amount of lateral displacement. Figure 1 is an example of using axial expansion joint.

The flexible device consisting of two bellows connected by the middle connecting pipe, pull rod, end plate, etc. compensates the thermal displacement of the plane or three-dimensional bending pipe section by means of transverse displacement. The pull rod device shall be able to bear the pressure thrust and its additional external force.
The double tie rod type expansion joint is particularly suitable for absorbing transverse displacement. In addition, this design form can also be used to absorb axial displacement, angular displacement and any displacement synthesized from these three forms. The general usage is to set the expansion joint with connecting rod in the middle arm of the 90 ° Z-shaped pipe system, and adjust the connecting rod to prevent the external axial displacement. Fig. 2 and Fig. 3 There are two application examples. Figure.4 Use elbow pressure balance expansion joint when there is combined axial and transverse displacement

Fig.5 A common case which is very suitable for the use of elbow pressure balanced expansion joint 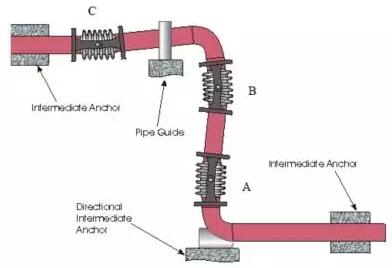 Figure.8 Example of using hinged expansion joint when bend angle is not equal to 90 ° Taking the modeling and analysis of the common double tie rod expansion joint as an example, the pipeline is a high-temperature extraction pipeline, the design temperature is 269 ℃, the design pressure is 0.5MPa, and the material is carbon steel. The pipe model is shown in Figure 10: Stress condition of relevant joints of pipeline
In the pipeline, it can be seen from the stress conditions of each node that the supporting forces at nodes 10, 80 and 140 are all too large; the primary stress is within the required stress range, and it can be concluded from the design conditions of the pipeline system that the secondary stress is mainly caused by the thermal expansion caused by temperature, which causes the deformation of the pipeline, and the deformation is constrained by the support to generate the thermal stress;
Therefore, in order to reduce the secondary stress of the pipeline, a feasible design must be adopted to absorb the displacement caused by the thermal expansion of the pipeline, so as to reduce the thermal stress. Now, double tie rod expansion joint is added to the vertical pipe at the equipment outlet, and the added model is shown in Figure 13,
The specific modeling process will not be described here. Considering the additional vertical downward displacement of the equipment to the pipeline, only node 10-50 of the whole pipeline system has a vertical pipeline direction, so the expansion joint is added to the vertical pipeline.
Re check the stress calculation of the pipeline. Since the primary stress before expansion joint is not added does not exceed the allowable stress, only the secondary stress can be checked here. The calculation results are shown in Figure 13.